I took Craig Nelson Speed Studies Workshop in April at Patris‘ Studio in Sacramento. It was a three day workshop. The first days were devoted to the figure. But the last day he demonstrated landscaping painting.

Craig often paints from photos. He usually enlarges his photos about 11 x 14.

Using a bristle brush about 1/2 inch wide, he lays in the midtones. The brush is nothing fancy; purchased at a hardware store.

Unfortunately I wasn’t able to capture the very beginning before he laid in the colors. But here he worked in the midground before working on the waves.

With just a few strokes the waves came alive. His style is impressionistic so the waves are not rendered very detailed but yet there’s the sense of waves crashing onto the beach.

Almost finished painting. Craig would work on it a bit and then helped students. Then he’ll return to add a bit more.

Close up of the background.

Close up of the trees

Close up of the area before the water.

Close up of the waves.

More close up of the waves.

In Day 2, Oliver demonstrated with a charcoal pencil.

Oliver is using the side of his charcoal pencil 2B.

Darker values with charcoal pencil, 4B or 6B.

Block-in beginning with a charcoal pencil 2B. Paper is Strathmore Drawing 18 x 24 inches.

To create the texture of the beard Oliver draws with squiggly lines.

Oliver shows some of charcoal pencils on toned paper.

In the afternoon we worked on toned paper. But first we did some 10 minutes warm-ups on Strathmore drawing paper. The toned paper we use Canson Tientes. Oliver suggested used the smooth side for women and children’s portraits. The textured size best for men.

Beginning with a 2B charcoal pencil for block-in.

White is added sparely. Only used on highlights and never mixed in with the charcoal. The mid-tone paper does all the work.

I learned how to use white charcoal to create volumes in the model’s beard.

Spraying is not needed for charcoal pencils. Only for vine charcoal drawings.

I took a workshop from Oliver Sin at the Liv and Chiu Art Studio in Berkeley this past weekend. Just on a whim…when I saw a post from the studio on Instagram. And I’m so glad I did. It was a weekend full of ways to work with vine and pencil charcoal.

On Saturday, Oliver introduced vine charcoal. He is a master! His Instagram is filled with vine charcoal portraits of which two are of his parents had won multiple awards.

Oliver stressed continuously to pay attention to shapes and planes – not the individual features.

Below is Oliver’s demo.

Oliver emphasized shapes, planes and values. Especially create a very dark value, value 5 so that it would be easier to establish the other values. I was amazed how dark a vine charcoal can make.

I expected to learn about using the stumps or tortillons for blending. Rarely does he blend. He blends just on the very light values…never the darker values.

Below is my drawing.

I started Sadie Valeri’s Online Program in May 2016 and I finally finished the basic Classical drawing program. The drawing program consist of learning how to draw the spheres and ellipses perfectly, shading, copying the Bargue plates, and blocking in still life objects. These lessons have been life-changing in my art and had taught me more about drawing more accurately and shading techniques. What was so invaluable are her personal critiques which aid my learning faster and at a very affordable price.

Sadie has a Youtube channel that provides some ideas of her teaching methods.

I just finished an online workshop with Felicia Forte. She is a well-known representational oil painter whose works has been exhibited throughout the US as well as abroad. I had taken her workshop in Los Gatos, CA and felt that I can learned more from her. So I signed for her online classes.

There were many “aha” moments but the main point I have taken away from the sessions is that I need to pay more attention to clean brushstrokes and to be decisive in what colors I mixed. Below is a quick oil study that I did after finishing.

I had an opportunity to attend a workshop by an artist I had been following on instagram for quite a while, Felicia Forte. Her workshop was at NUMU in Los Gatos. The focus of the workshop was to paint with a limited palette, Zorn Palette (titanium white, ivory black, yellow ochre and cadmium red) within a limited time period.

On the first day, Felicia showed us her approach step-by-step. Starting with an accurate drawing of the head, she used the average dark value to block in the darks/shadow areas and then with the average light value painted any areas in the light. Then from there she finished off the portrait with more accurate and deliberate brushstrokes

Day 3 was the 3-hour painting – a longer painting time.

What I learned from this workshop: draw accurately, find the average dark and light values and painting within a time limitations.

I took a workshop taught by Stacey Vetter called Abstract Nature. The focus as described in the class description is to capture “the essence of still life objects from the natural world.”

Stacey had us do a series of exercises – working with brushes, sumi ink and watercolor. Her critiques pointed out three essential design qualities that attracts the eye – scale, texture, and light versus dark.

Below is what I had  done during the workshop.

My first attempt using this concept outside the workshop was a palm tree.

I was excited to be able to take a workshop with Qiang Huang. I had been following his blog for a few years now and had admired his loose brushworks and gestural paintings of still life, landscapes and figurative.

Basically self-taught, Qiang, had become successful in selling his works online as well as in galleries. He had taken workshops from David Leffel and Scott Burdick.

So his “secrets” in loose brushstrokes were “revealed” to me in this workshop.

Setting up the still life was so important. There were still life stations set up and we, students had to set up our own still life. Qiang then went around each station and critique our still life, even rearranging to show what worked and what didn’t. This was a gold nugget for me.

Before blocking in Qiang applied a little linseed oil to smooth out the surface. Even on his linen canvas. This allows the paint to go on smoothly especially for the background that needs to be transparent.

Using a mixture of ultramarine blue and transparent red oxide, Qiang painted in the darks and mid values with a soft watercolor brushes. It seemed that he painted mostly with that. His principle with brushes is sable/synthetic brushes for transparency like in shadows and darks. For light, bristles are best for texture and opaqueness.

Now comes the general application of colors. Here Qiang followed his grisalle established in Stage 2 to determined the values of colors for each object. He put in his very darks and his light in order to work the mid values. There is an abstract quality at this stage. He questions the temperature, the opacity and the chroma for the objects in the set up. It was in this stage that I got lost in my own painting.

Here edges are defined. Are they soft or sharp? The objects are looking more like 3-D.

The final is completing the painting. It’s solidifying the colors into the objects. Or leave some in an abstract form.

Below is my painting in the workshop…actually it’s the second one.

Qiang rearranged our still life. It was important that it reads from left to right.

I was able to establish the values and add the colors to match up with the values. This was my second attempt.

This was one of the best workshop I had ever attended. Qiang, a former professor, knew exactly how to present his lessons a logical way – broke his painting process in stages.

In addition he presented his lessons in different ways for different learners. Day 1, Qiang did a three hour demo and then we painted in the afternoon. Day 2 though he painted in stages. He did stage 1 and then we went to our stations and did stage 1. All the stages was done this way so that we can see where we have done right or wrong.

Qiang is a regular at Patris’ and hopefully, I can take his workshop next year.

In WattsAtelierOnline, I’m now in a series of videos introducing four methods of painting the portrait in color. This is the first method – Burnt umber underpainting with color.

First, a detailed pencil drawing is done. It is sprayed with workable fixative so that the pencil won’t smear when oil is applied.

Then just using only burnt umber and Gamsol, I create a value study. I used various items to remove lighten the value – cotton swab, rags, fingers, kneaded eraser. This took about 4 hours to do.

This method is great for portrait commission.

Watts had set up his palette for the 9 values of each color – grey, yellow, red, green and purple. I had not been working with the 9 values setup but only three values for the light and two values for the shadow. To extend the life of his paints, he uses clove oil. I’ve been using walnut oil and seems to working for me…but one I’ll buy the clove oil.

THE ARTERY is an artist cooperative. They have high quality arts and crafts from artists around the Sacramento Valley. They are located at 207 G Street in Davis, California. I have been accepted there for my still life paintings. This is a perfect store for holiday gifts.

Offering commissions for pets in oils or watercolor. Email me at marleneleeart@gmail.com or visit my Etsy shop for images.

Due to a small fire, the Pence Garden Tour Exhibit Reception had to be rescheduled!!!!
Is this another painting opportunity? In my front is a birch tree surrounded by irises and discovered a bird in her nest.
Bunches of roses at M Three Ranch, 6 x 8 inches, oil on canvas panel
"Resting in the Mid Morning Heat", 2022
quick portrait sketch in 20 minutes
Mother and daughter exhibit Cathie James-Robinson and Amanda Cadelago at the Artery now 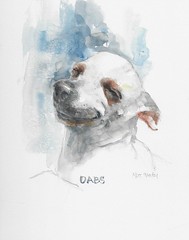